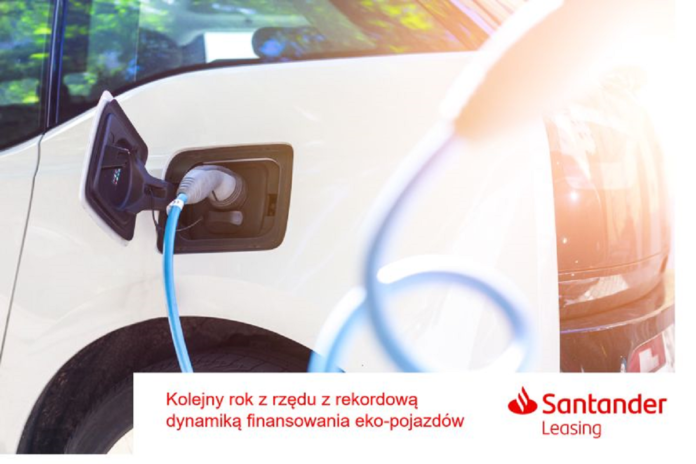 The latest analyzes of Santander Leasing in Poland indicate, only from January to the end of May this year the company financed eco-vehicles with a total value of PLN 100 million (approx. 22 067 000 EUR), which gives an impressive 68% dynamics y/y. By the end of this year, an upward trend exceeding 100 percent will persist in Polish electromobility. “Financing low-emission cars has been one of our priorities for years. Today, we can say that not only direct subcidy but also offering entrepreneurs the oppo rtunity to take advantage of attractive financing are factors favoring the dynamics of investments in this segment, unique in terms of economic indicators. The value of the lease of electric and hybrid cars at Santander Leasing increased by almost 20% throughout 2020 y/y. In 2019, the value was slightly over PLN 137 million (approx. 30 231 358 EUR), in the previous year – almost PLN 164 million (approx. 36 189 363 EUR). The current year and the results achieved by us indicate another record in this sector.

It is worth mentioning that not only the automotive industry but also customers themselves expect new incentives to buy electric cars. Certainly, an important impulse that may positively influence the increase of investments in that area is the program that should be announced in Poland in the middle of this year by the Ministry of Climate and Environment and the reduction of the limits of depreciation costs of alternative drive cars by 2026.” – said Mariusz Włodarczyk, Managing Director at Santander Leasing.

The offer on the market in the segment of financing hybrid and electric vehicles is constantly developing, and most importantly, the awareness of solutions in this area, both for individual customers and enterprises, is growing very dynamically. Santander Leasing continues to support companies in this regard, hence the offer for financing electric and hybrid cars was extended by the end of 2021. Entrepreneurs interested in purchasing a passenger car and a delivery car up to 3.5 tons, electric or hybrid, can take advantage of the leasing offer, respectively, 100 and 102 percent. In the case of an investment in an electric vehicle, this means no interest costs for the company, even for 36 months.

According to the “Electromobility Meter” by the Polish Association of Automotive Industryand the Polish Alternative Fuels Association, by the end of March this year, 22 291 electric cars were registered in Poland. During the first three months of this year, the number increased by 3,555 units, i.e. by 107 percent more than in the corresponding period of the previous year. As indicated in the report, the charging infrastructure is also developing along with the increase in the number of electric vehicles. At the end of March, there were 1,425 publicly accessible charging stations for electric vehicles in Poland (2,780 points), 33 percent of them were fast-charging stations with direct current (dc), and 67 percent. were slow ac chargers with a powerless than or equal to 22 kW. As of February, 15 new, generally accessible charging stations (33 points) were launched also in March. „Market results confirm that Poles are more and more interested in electromobility. In the first 4 months of this year, over 1,000 more passenger EVs were registered than in the entire 2019. In addition, the number of electric cars sold from January to April turned out to be higher than the registrations recorded in the first 8 months of 2020, which so far has been record-breaking in this respect. Nevertheless, the absolute numbers are still too low for us to have a chance to catch up with European leaders in sustainable transport. In France, for example, in April alone, approx. 22 thousand of BEV and PHEV were registered – this number is similar to the entire park of electric cars in Poland” – said Maciej Mazur, Chief Executive Officer – Managing Director atPolish Alternative Fuels Association.