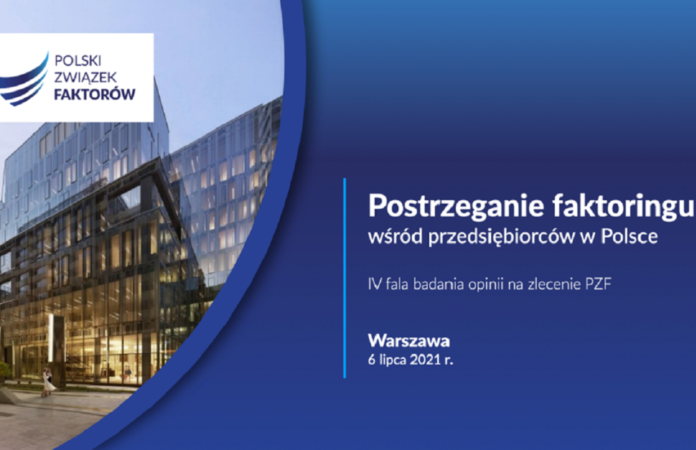 Nearly four out of ten entrepreneurs running a business in Poland (38%) consider factoring as an instrument to improve financial liquidity. The factoring attitude indicator among current and potential customers is 32.1% which is almost the same as it was last year.
The Polish Factors Association conducted the fourth wave of research on the perception of factoring services among Polish entrepreneurs. Both conditions of running a business and the attitude to financial solutions influencing the development of business were analyzed. The study aims to discover the opinions and expectations regarding the situation in which entrepreneurs function in Poland and the provision of factoring services in that environment. This year’s survey was done in March this year and generally has been carried out on an annual basis since 2018. „As a service provider aimed to solve specific problems faced by entrepreneurs, we must first recognize what barriers Polish entrepreneurs meet every day. That is why we started the study from the diagnosis of the most severe barriers to running a business” – says Konrad Klimek, chairman of the Polish Factors Association executive committee.

During last year, entrepreneurs most often complained about the difficulties related to the pandemic: the need to suspend operations, difficulties in contacting other people, or absence of employees. These problems had already occurred in the previous year but were not perceived as the most important ones. While decreases or lack of orders were considered as the most painful. Another problem that emerged last year was the lack of qualified personnel.

Nearly half of the entrepreneurs faced financial barriers, resulting in liquidity problems. Almost 3/4 of the respondents mention the period before the pandemic as free from such difficulties. In turn, 1/3 faced payment backlogs (a year ago, 4 out of 10 mentioned that problem). Also, the lack of payment on time was less annoying this year than the previous year. This may be related to the use of various types of government aid programs.

EVALUATION OF FACTORING BY ENTREPRENEURS

Entrepreneurs asked to evaluate factoring as an instrument to improve financial liquidity. Nearly four out of ten of them (38%) rated this service as a good one. A year ago, there were 5 percentage points more (43%). On the other hand, the percentage of critics has decreased to the same extent.

“The willingness to pay for the quick receipt of payment for delivered goods or services dropped this year. When the stream of financial government aid has been launched, this readiness to pay for early payments dropped immediately in many industries, as we can see in this year’s results” – notes Konrad Klimek.

The strong impact of the effects of the pandemic can be seen when looking at the factors influencing the choice of the factoring company. So far, the price of the service in all editions of the study has always been decisive. It is similar this year, but the number of indications of this element has significantly decreased. This phenomenon affected other factors but to a lesser extent.

„This may mean that when losing liquidity is becoming real managers and can lead to the loss of business, they are more likely to accept a certain cost or inconvenience if they are about to receive help in the form of a service that avoids such a risk. When they could count on government aid, this tendency decreases,” – explains Konrad Klimek.

“Getting our business back on track still requires work. Education of entrepreneurs and promoting the idea of reasonable liquidity management play a special role. We will target our programs for entrepreneurs and business managers who are active today, as well as for future business personnel,” sums up Konrad Klimek.

December 06: Polish National System of e-Invoices (KSeF), or what awaits us from January...