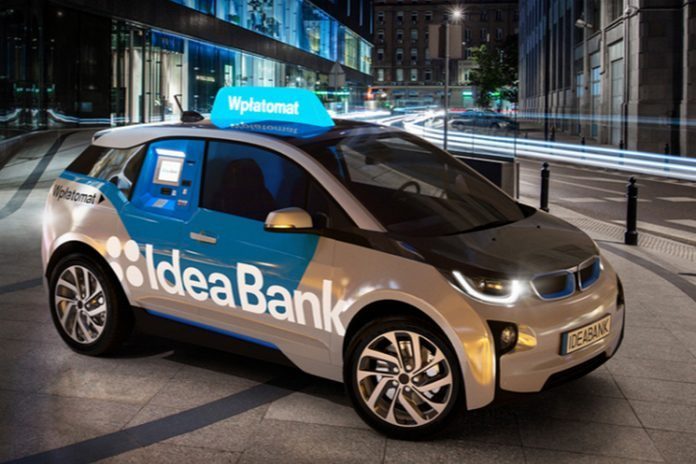 After Mobile ATMs launch it appeared there was an appetite for remote deposit transactions even for the amount of several hundred thousand zlotys. In Mobile ATM with standard equipment, such an operation can last long, even after we increased the capacity of cash tray from 50 to 150 banknotes at a time. But this was not enough. Which is why we did our next step, and we are going to montage specially designed cash vaults in new cars.

An entrepreneur who orders Mobile ATM via mobile app and declares an amount more than 20000 zlotys to deposit will be asked to choose Mobile ATM with cash vault functionality. By selecting the last one customer will have an opportunity to pay both by using cash vault and standard ATM functionality as these cars will be equipped with both.

Now we have 19 cars. But this is not the end. We are preparing our next 18 cars. We are already present in the biggest Polish cities, and we will be in the next ones. In the cities where Mobile ATMs are already on the streets, we will increase their number as demand for the service is growing.

To deposit money by using mobile cash vault a customer needs a card issued to the current account in Idea Bank and special envelope. A customer can get such an envelope in Idea Bank’s branch or order via call center, in that case, the envelope will be delivered to the customer. At the beginning put your card into the card reader, a card has been processed. The next step – scan a barcode printed on the envelope, filled with money. After the code is scanned, declare an amount to deposit (we are writing 25000), accept the transaction. When we hear the lever has been released, put the envelope to cash vault and close. The transaction has been processed successfully. End the transaction. Select whether you want to print the receipt. Yes, I accept. So this is the proof that the amount of 25000 has been deposited into my current account in Idea Bank. As I put only banknotes, the amount would appear on my current account within 4 hours the latest. There would be a difference if I used a standard Mobile ATM for cash-in. Here all money appears on the account immediately.

32% of entrepreneurs use only cash in their daily transactions; the remaining 68% combines cash and cashless transactions.

Survey: The Czech entrepreneurs and the digital business solutions

ING makes it easier for companies to invest in sustainable development